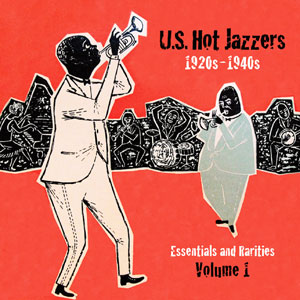 When The Viper chaps approached me to put together two volumes of Classic Jazz for release on their remarkable label, I said to myself, “That’ll be fun, pretty easy too”. Fun it certainly was; easy, it most certainly was not. The difficulty here was how to present this ground-breaking music to both new-comers and die-hard enthusiasts alike without over-duplicating what already exists in the market place. As a result, these two volumes contain items that are well-known but absolutely essential listening, together with a smattering of harder to find gems that have only been previously available in poor condition on long-deleted formats.

Much information is readily available regarding the importance of Jazz as the first truly Afro-American contribution to late 19th/early 20th Century Art and Popular Culture both at home then (incredibly swiftly), abroad. The importance of the myriad white contributors who history initially relegated to the role of copyists except in a few rare instances, is now firmly recognised. The selections presented here reflect this, with the music traveling from its roots in New Orleans (represented by both ‘Black’ and ‘White’ bands) to the rest of the World via Chicago and New York. New Orleans is re-visited in the 1940s with music from the revival which sparked the thousands of U.K. would-be ‘Trad Jazzers’ of the ‘50s (including myself).

Let’s not forget that this form of Jazz was first and foremost a music for dancing and represented the voice of a new Century, determined to banish the horrors of the ‘14/’18 War forever, just as Rock ‘N’ Roll would reflect the changes embraced by an equivalent post WW2 generation. Music remains a force for such change and this selection of early Jazz is a veritable cornucopia of top-notch, essential music, presented in the best possible sound quality.