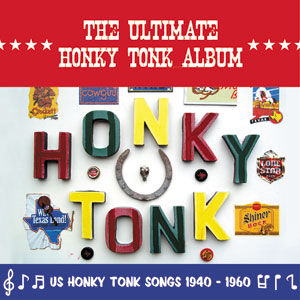 The term Honky Tonk was first used in Texas in the late 1800’s. It was associated with bars and saloons that staged music performances to entertain a cowboy clientele in the deep South of the United States. It was also associated with a style of piano playing that goes back to the English Music Halls of the Victorian era. When Jazz influenced Western Swing bands toured the Southern States they relied on these venues to air their wares. After World War Two the Honky Tonk became more associated with Country music and a place where working class men and women could be entertained and allowed to let down their hair on a Saturday night after a hard working week. Eventually the Honky Tonk played an important part in the development and spread of Rock n Roll across the United States with the introduction of a record machine called ‘the Jukebox’.
So many great songs celebrate the Honky Tonk (and just as many lament their popularity in a puritanical deeply religious area of the United States) Here are twenty hand picked Honky Tonk  tunes to set your heart a racing and your feet a stompin’ on the Honky Tonk Hardwood Floor!