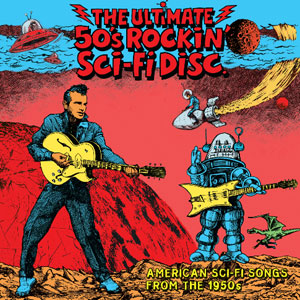 To celebrate the 40th Anniversary of the Apollo missions and 50 years of Space exploration, The Viper Label has put together a unique collection of original 1950’s Sci-Fi influenced recordings, reflecting the general feeling of paranoia surrounding the Cold War (the launch of Sputnik by the Russians) and the Space Race that developed between the two super powers. This album also exposes early artistic impressions of the first wave of Flying Saucer news items, inspiring some truly dynamic interpretations on the phenomenon! This is the shiny new world of Rock ’n’ Roll that embraced the Space race and its potential to open up the universe. Included are some of the brightest, most challenging examples in the early development of pop music, drenched in fantasy and experimental sounds- Honeymoons on Rocket Ships, and Rockin’ Martian Parties. This is an important cultural record illustrating a time when no one knew what the hell was going to happen next! – its also great fun – they don’t make them like this anymore!