Various ‘The Song Before The Song’ CD/DL-039 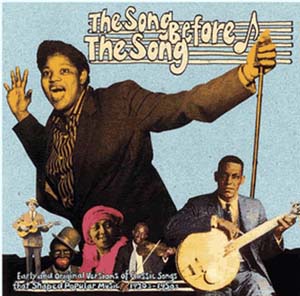 Various ‘The Song Before The Song’ CD/DL-039

Behind most famous songs that we all know and love, are the original/early versions that we have never heard – until now.
Highlighting a fascinating period in the development of Popular music, these songs inspired and influenced artists, covering them almost exactly or taking elements & molding it into their own version.For example Elvis heard Big Mama Thornton’s version of ‘Hound Dog’ and copied it almost exactly but in his own distinctive style. Bob Dylan heard ‘Highway 61’ by Jack Kelly’s Memphis Jug Band and this inspired him to write his own ‘Highway 61 Revisited’.Whether the original or early version is better than its more famous off spring is debatable but it raises the question- if the song was good in the first place, why wasn’t it the original or early version that became famous? The answer to this is quite simply that the social and political climate at the time was totally wrong for these songs to be heard by a mass audience. There was no worldwide music industry, marketing etc as we know it today -also many of the artists were black. Thankfully the legacy of these great songs still lives on today, in what we all know as Popular music- without them it would be totally different.