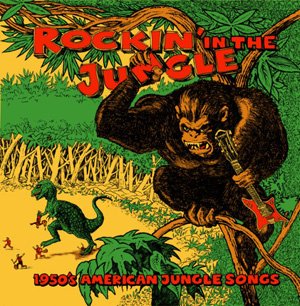 After the dark years of World War Two, there still existed a notion of Africa as a land of mystery, a lost twilight world that was wild and untamed – Rock ‘n’ Roll (with it’s origins in the Rhythm and Blues that had evolved from the liberated slaves of African origin), became fascinated with the Dark Continent -Tarzan movies becoming particularly prevalent during the 1950’s.

This new and exciting era in popular music may not have been as enlightened as now, but it got toes tapping, legs swinging and hips shaking! We present in this unique compilation, for the first time, an important cultural record of a time long since gone, a collection of dangerous, pounding rhythms, Ape Calls and a menagerie of wild beasts proving to be an ideal theme for a Rock n Roll song-