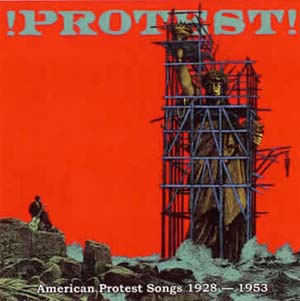 The definition of protest is ‘a statement or action showing that you disapprove of something’. This is something that we seem to have pushed to one side in this day and age (in Western Culture anyhow). In the first part of the 20th Century, it was a different story, with protest songs coming in all guises and musical genres. Within the confines of this album, we have tried to represent great examples of each. They range from the incredibly emotional and heart breaking : Billie Holiday’s ‘Strange Fruit’ and Woody Guthrie’s ‘1913 Massacre’ – to the light hearted and humorous : The Golden Gate Quartet’s ‘Atom & Evil ‘ and Texas Jim Robertson’s ‘ The Last Page of Mein Kampf’- (but still with a serious message).
Subject matters include: Civil Rights, the Atom Bomb, being poor, homeless and unemployed, Prostitution, War and at times all the wrongs of our society.This subject matter was never going to make for easy listening but surely music and song writing is not just about entertainment! It should also enlighten and if not directly change the world, at least point out a few home truths about the society we have created. Music can be used as an incredibly effective weapon – something it seems we have forgotten about……Listen and learn.