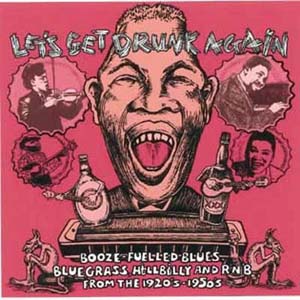 A unique collection of original, alcohol fuelled/influenced Blues, Bluegrass, Hillbilly & R ‘n’ B from 1920’s to 1950’s America including Robert Johnson, Louis Jordan, Bessie Smith, The Dixon Brothers and many rare & wonderful artists.
The Major reason for starting this project was the realization that no one had ever attempted to put together a collection like this before, taking in all the genres of Blues, Hillbilly, Bluegrass and R ‘n’ B drink related music. Alcohol has played an important part in most civilizations with the 20th Century being no exception, especially with the birth of Popular music. Many musicians would write songs about their drinking and its effects, this music being influenced and played in the drinking dens and speakeasys of the times. It was an essential part of the blues and all the other musical genres, times were hard and drinking could get you through. These songs tell stories of people’s lives through heartbreak, prohibition, the colour of your skin, post- war affluency – in many ways are a social history lesson.Raise your glass and lets all toast these unsung heroes.