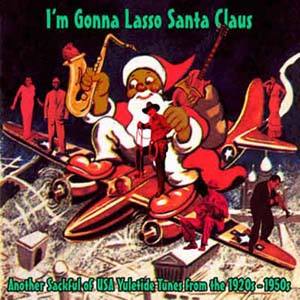 Another Sackful of Original, Festive American Rock ’n’ Roll, Rockabilly, Jazz, R‘n’B, Doo-Wop and Blues from 1920’s to 1950’s.
After the success of ‘Papa Ain’t No Santa Claus, Mama Ain’t No Christmas Tree’ (Viper CD 019 Released Nov 2003) The Viper Label decided to delve into the Festive music of the past once again, to see what goodies could be found. Unearthing more Christmas gifts and delights dating from the 1920’s to the 1950’s, most of which had been forgotten- until now. Whether it be Blues, Rock ‘n’ Roll, Jazz or Doo- Wop -all these songs have an irresistible charm, guaranteed to make that Christmas party swing. They range from guitar instrumentals (Les Paul – ‘Jingle Bells’), through to the Hawaiian influenced (The Dinning Sisters with Bob Atcher ‘Christmas Island’) and to Cowboy music! (Tex Ritter – ‘Christmas Carols by The Old Corral’) Another essential album for your festive enjoyment to be placed under the Christmas tree and unwrapped on Christmas Morn.