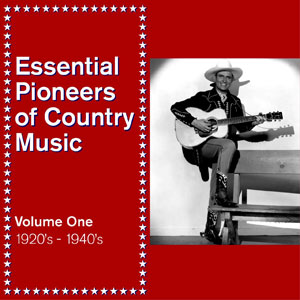 Country Music has always been one of the main staples in the history of American music.
It’s origins stem from the European migrants who settled in the Appalachian mountains (known as: Hillbillys) and white farm workers in the Southern States who had brought traditional ballads and Celtic folk tunes from their homelands across the Atlantic. This music took on different forms as their American rural lives offered up new folklore bringing along such themes as Cowboy music, Mountain rags and maybe a small dose of the Blues. In fact it could even be said that ‘Old Time Country Music’ was the ‘White Man’s Blues’ helping these people through tough lives eking out a living in often very harsh environments. Country music gained great popularity and commercial appeal with the emergence of  independent radio stations in the 1930’s & 40’s, one of the most influential of these was broadcast from the now world famous Grand Ole Opry in Nashville Tennessee.  This series of Essential Pioneers of Country can serve as an introduction to some of the best originators of the genre. Volume 1 features such luminaires as: The Carter Family, Gene Autry & Vernon Dalhart, as well as unearthing classic rarities by relatively unknown performers. Another essential album from The Viper Label.