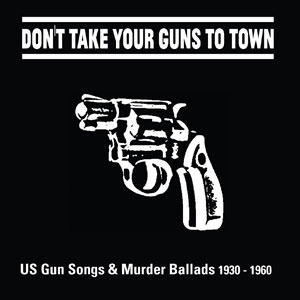 For obvious reasons the gun has always been a hot topic, engrained in American culture and a big part of its history, ‘The right to bare arms’ is part of the United States second amendment. Whilst gun enthusiasts have recently been stocking up, scared at the prospect of regulation being brought in to prohibit the sale of firearms, the debate rages on in a Nation that was forged in gunfire -as yet another heart breaking atrocity takes place. Here at Viper we are intrigued by the music and culture of North America and the status of the gun as a theme in it’s musical history is self evident. From the gun toting cowboys of the Wild West and Gangsters shooting each other, hunting and on through to the mid Twentieth Century and the use of guns to settle domestic disputes, there is a wealth of gun related material to choose from. Here are twenty such tracks that will help shine a reflective light on a nations insistence to protect itself, whilst too often suffering at its sheer abundance of firearms.
You can’t help thinking that Johnny Cash might have been speaking wise words in the opening track- ‘Don’t Take your Guns to Town’.