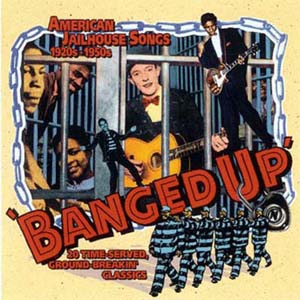 American Jailhouse Songs 1920’s to 1950’s
Along with previous themes that we at Viper have covered including: ‘Lets Get Drunk Again’ (Viper CD031) ‘The Ultimate 30’s & 40’s Reefer Songs’ (Viper CD021 ) Protest!(American Protest Songs(Viper CD036)musicians and excess seem to go hand in hand, trouble seems to follow these free spirits that don’t seem to fit well into society and so that leads to brushes with the law and inevitably -Prison.Jail house songs exist in most musical genres whether it be Country, Blues, Jazz or Rock ‘n’ Roll – most of which are represented here on this album.
Many of the musicians featured on BANGED UP were born on the wrong side of the tracks, poverty and other social factors forcing them to use their instruments as a weapon against the harsh realities of everyday life, or at the very least reflect what was all about them.The places that they played often attracted trouble, whether that be in the local Bar Room, Speak Easy, or Honky Tonk, crime, drinking and loose women where never far away. Times were hard – you could be locked up just for being black on the charge of vagrancy! Many famous musicians have spent time in prison and some even recordedthere, such as Leadbelly and Johnny Cash.These songs from the underbelly of society, though recorded over fifty years ago, show dramatically how society has not changed much, Prisons are still being built to cater for the people that society helps to create –and then cannot handle!