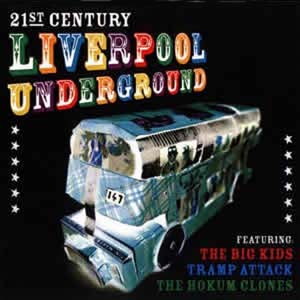 ‘21st Century Liverpool Underground’ is an album of classic cuts by three influential bands that have spearheaded what has been called ‘ the new wave ‘/ ‘cosmic scouse’- each of whom are important in their own right. First up are The Big Kids formed and fronted by the legendary Edgar Jones (Formerly known as Edgar Summertyme of The Stairs ) and including Shaun & Russell (now in The Zutons) and Howie Payne( now the leading light in The Stands). This all star band were a growling blues/soul sensation. Next Tramp Attack featuring the future singer/songwriter of The Zutons, Dave Mc Cabe ( He sings lead on 2 tracks written by himself, ‘Broken Man’ & ‘ Swine’). Liverpool’s own inspired country, blues & Northwest coast garage band. Finally the scenes spiritual leaders The Hokum Clones, a duo that played what can only be described as psychedelic ragtime blues. The Hokum Clones toured with The Coral, Richard Ashcroft and Polyphonic Spree. This is an original and unique record that once again demonstrates that Liverpool stands alone in its innovative and inspired musical pedigree. The storm before the storm. All tracks are previously unreleased and recorded between 2000 & 2003.