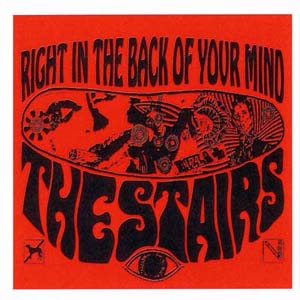 The Stairs were truly one of the great lost bands of the early Nineties who influenced (along with The La’s), a whole new generation of musicians including The Coral, The Zutons and The Stands. This Liverpudlian 3 piece embraced wholeheartedly 1960’s Garage, R ‘n’ B and Psychedelia creating something all their own, topped by the astounding growling blues vocals of Edgar Summertyme. They released little apart from the legendary EP ‘Weed Bus ‘ and the album ‘Mexican R’n’B’ before splitting up in 1993.’Right In The Back Of Your Mind’ is the sound The Stairs wanted to achieve. It is mean, dirty,gritty,raw and passionate, spanning the whole spectrum of their existence. All these recordings are previously unreleased and include such classic cuts as ‘Weed Bus’ ( one of the first versions ) and the demos of the still yet unreleased Stairs second album – British Psychedelia at its best.It’s only now in 2006, a decade or so after their demise, that The Stairs have become as legendary as the the bands they so admired. Edgar Summertyme or Edgar ‘Jones ‘ Jones as he is now know, resurfaced with the critically acclaimed album ‘Soothing Music For Stray Cats’ in 2005.
It was Noel Gallagher’s album of the year.