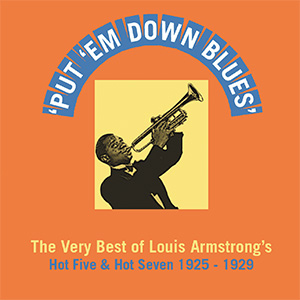 Louis Armstrong is not only one of the most influential figures in Jazz history but also one of the most important figures in 20th Century American culture. Louis was an incredible Trumpeter, Composer & Singer with a long career spanning five decades. He came to prominence in the 1920’s with his bands the Hot Five and Hot Seven, (the best of which are featured on this album). His gravelly voice is instantly recognizable, he could scat and sing extremely well in a style all of his own and was indeed the first to make his new brand of vocal jazz popular to America and the world. He would often improvise and bend melodies, (no doubt influenced by his daily use of marijuana which he smoked most all of his life!)- No one can deny this much loved genius his due credit as an artist and later as that dear ‘ol friend-Satchmo (1901-1971) that appeared on film and television with a smile that could melt any frozen heart. Sit back relax and listen to one of the true greats at the start of his momentous career.