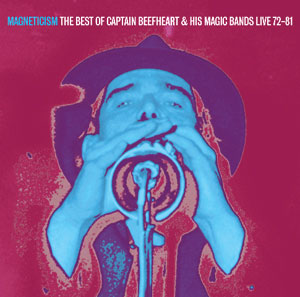 ‘Magneticism’ features some of the finest Live performances by Captain Beefheart and his Magic Bands, combining the highlights from two previous releases ‘Magnetic Hands’- Live in the UK 1972 -80 and ‘Railroadism’ – Live in the USA 1972 – 81 plus unreleased rarities. Led by the enigmatic singer song-writer Don Van Vliet (Captain Beefheart), his various Magic Bands were obsessively faithful to his musical visions. ‘Live’ they always shone and these joyously cacophonic & unforgettable performances make this a truly historical document, showing one of the great innovative bands of the modern age on staggering form. These recordings also give a broad scope of the Captain’s work with material from every era of his career, reminding us of why even today he is still regarded as one of the most important and influential musical artists of the 20th Century.