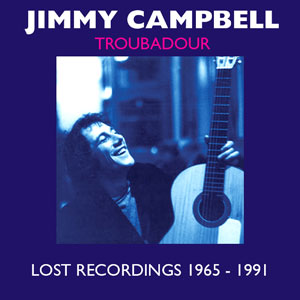 With the exception of The Beatles, few Liverpool singer/songwriters from the Merseybeat era went on to deliver a continuous body of work. Jimmy Campbell, a man of extraordinary sensitivity, was one of the few. Having formed The Kirkbys in the mid 1960’s, he went on to form The 23rd Turn Off (which was at the time the M6 exit for Liverpool) releasing thepsychedelic masterpiecefor which he is probably best known: Michaelangelo.
He started a solo career in 1969 with the release of the beautiful ‘Son of Anastasia’ and, after two further solo releases, made one seminal album as Rockin’ Horse with his good friend Billy Kinsley of The Merseybeats, also backing Chuck Berry on a European tour in the early 1970’s.
The Viper Label are delighted to release ‘Troubadour’ an album that illustrates through song one of Liverpool’s lost treasures. Compiled from out-takes. alternative versions and live recordings from 1965 –1991 this album spans for the first time the entire gamut of Jimmy Campbell’s exceptional song-writing ability.