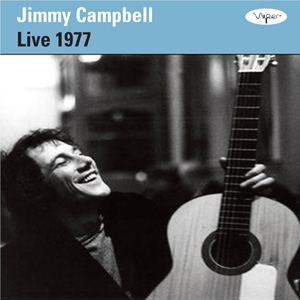 With the exception of The Beatles, few Merseybeat artists went on to deliver a continuous body of self-penned work that ran into the 1970’s. Jimmy Campbell, a man of extraordinary sensitivity, was one of the few. Having formed one of the better beat groups of the 1960’s in The Kirkbys, he then went on to form psychedelic pioneers The 23rd Turn Off (which was, at the time, the M6 exit for Liverpool).
He started a short-lived solo career in 1969 with the release of the beautiful ‘Son of Anastasia’ and, after two further solo releases, made one seminal album as Rockin’ Horse with his good friend Billy Kinsley of The Merseybeats, also backing Chuck Berry on a European tour in the early 1970’s. Shortly after, disillusioned with the industry, Jimmy Campbell all but retired from the music scene.
However, it is now with great delight that an exceptionally rare live performance has been brought to light from 1977. Featuring some of his greatest songs, alongside a collection of previously unknown material, this historic recording has extra resonance since Jimmy’s death (in 2007) and the subsequent re-issue and re-appraisal of all his previous work.
Special thanks to Mark Kelly & Mark Johnston and Janis Schacht for the use of her photograph.