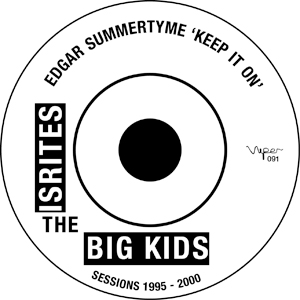 Edgar Summertyme-  (aka Edgar ‘Jones’ Jones) has been forged into a legendary figure in the Liverpool music scene for decades. Since forming The Stairs in the early 1990’s he has released a succession of acclaimed solo albums, indeed ‘Soothing Music For Stray Cats’ was voted the NME number one slot in ‘The Best Top One Hundred Albums You’ve Never Heard!’

However, there has been a missing piece to the jigsaw -the unreleased ‘Isrites’ and ‘Big Kids’ sessions made available here for the first time. The Isrites (an affirmation in Liverpool slang) were Edgar’s first post Stairs band lasting long enough to record these tracks before being hijacked by Lee Mavers to become that month’s La’s incarnation.

The Big Kids also had a restricted life span- there was just too much talent for one band to contain- Drummer Sean and Bass player Russ, became the new back line for The Zutons, whilst Lead Guitarist Howie Payne went on to form The Stands and release under his own name. What appears here is an indispensable set of high octane Motown garage stomp and soul. Available as a download album and on a limited edition of 50 vinyl look CD’s (signed and numbered by Edgar Summertyme and only available via the Viper site)