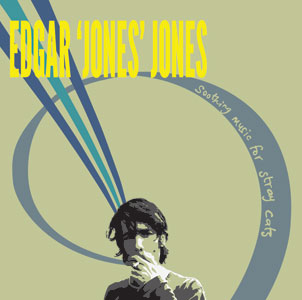 The Viper Label and Mellowtone Records are excited to announce the release of Soothing Music For Stray Cats by Edgar ‘Jones’ Jones; now available on vinyl for the very first time. The seminal album was originally released in 2005 to much critical acclaim, gaining plaudits from fellow artists and reviewers alike, with Noel Gallagher declaring it ‘the best sounding record to come out of Liverpool ever’. That’s not opinion… that’s a fact”.

The exquisitely eclectic nature of Soothing Music For Stray Cats garnered a dedicated following of admirers across the world and a rich supply of superlatives from the music press; “Stunning” (Mojo) “Mesmerising… Remarkable” (Record Collector), “Liverpool’s answer to Dr John” (Uncut) were just a handful of the words of praise lavished upon Edgar’s debut opus. The NME said: “Listening to this becomes an aural history of the world’s coolest music’’ and it took the Number One spot in their ‘100 Greatest Albums You’ve Never Heard’ in 2012.

The album was recorded and produced by Edgar in Liverpool, on an eight-track recorder given to him by none other than Johnny Marr, and the original fourteen tracks are now available for the first time in glorious heavyweight 180 gram black vinyl. Jenny Dalton’s artwork has been re-imagined by The Studio of Ezra and the LP is available in two formats, including a deluxe edition with limited edition art print, signed by Edgar Jones.

Edgar’s musical path began as front man of Liverpool band The Stairs, celebrated by the likes of Elvis Costello, signed to Go! Discs, then home of Paul Weller and The La’s. Their debut single ‘Weed Bus’ and following album Mexican R ‘n’ B, became classics of their time and the band have recently enjoyed a highly anticipated reunion. Through The Isrites and on to The Big Kids, Edgar’s muse was restless, but by 2005, he seemed to have found the perfect palate for his influences . Jazz, R ’n’ B, soul, and Doo Wop were smeared across ‘Soothing Music For Stray Cats’ in glorious technicolour.

As an artist in his own right Edgar has since achieved legendary cult status and has played with the great and the good including Paul Weller, St Etienne and Lee Mavers, “A form of National Service” to quote Edgar.

A triumph of eclecticism, a victory for perseverance and passion and without doubt a fine listen.  A timeless masterpiece.