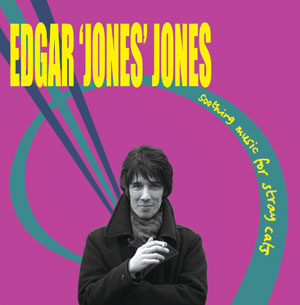 Originally released in 2005, Edgar ‘Jones’ Jones’s first solo album has received much critical acclaim including the Number One slot in the recent NME feature: ‘ 100 Greatest Albums You’ve Never Heard’ (Feb 2012). This is truly a great and unique album that defies boundaries. (Maybe it can be summed up as a witches brew of Jazz, R ‘n’ B, Soul and Doo Wop all mixed up with Edgar’s own special ingredient ).

Edgar started his musical path as the singer-songwriter/front man of Liverpool band The Stairs, celebrated by the likes of Elvis Costello and signing a record deal with Go! Discs. Their debut single ‘Weed Bus’ and the following album ‘Mexican R ‘n’ B’, went on to become classics of their time. Edgar Jones has since achieved somewhat legendary status as a Liverpool based artist who has played with the great and the good: he has worked with Paul Weller, Johnny Marr (who supplied the studio this album was recorded on), St Etienne and the lost La, Lee Mavers (‘a form of National Service ‘ to quote Edgar). This re-release is long overdue and contains many bonus tracks.