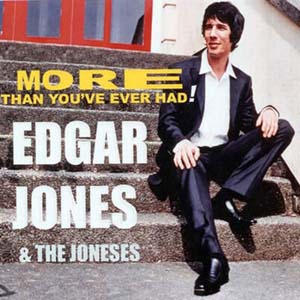 ‘More Than You’ve Ever Had ’ is the new single from Edgar Jones & The Joneses, a re-recording of a track that features on his critically acclaimed debut album‘ Soothing Music For Stray Cats’. ( ‘A stunning collection of Rock ‘n’ Roll, Jazz, R ‘n’ B, and Doo Wop’ said Mojo Magazine whilst it was Noel Gallagher’s album of the year 2005 ‘It’s probably one of the best records I have ever heard.’ ) This is an incredibly catchy track – once heard never forgotten with some soulful vocals by Edgar. Coming in around 2.15mins, they don’t make them like this anymore.
Edgar doesn’t do b-sides and track 3 hints at what his new album is going to sound like. A true artist who continues to amaze and surprise. You will be hearing from him for a long time to come.