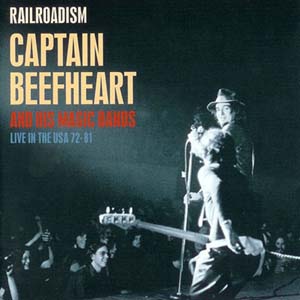 After the release of ‘Magnetic Hands’ – Captain Beefheart & his Magic Bands ‘Live in the USA 72-81′ (Released June 2002 – see enclosed Press Quotes page), it became apparent that to complete the whole live experience The Viper Label had to look across the Atlantic, to America-the Captain’s home, where he and his various Magic Bands toured extensively. This album shows what a magnificent, powerful and remarkable voice the captain had and what a truly formidable force the’magic’ band were.
This is another historic document and features such rarities as the captain performing ‘The Blimp’ from ‘Trout Mask Replica’ which leads him into playing a sax solo equal to the free jazz experimention of Ornette Coleman or John Coltrane, ‘Harry Irene’ with the best whistling outro ever and the lost gem, ‘Railroadism’- a distant cousin of the lost track ‘Hoboism’ + many more. This will not only be of importance to Beefheart freaks but to the world as a whole. Also features previously unpublished photos and indepth liner notes.